According to a 2020 survey by YouGov, less than a quarter of Brits are getting eight or more hours of sleep a night, with one in six getting fewer than six hours. We’re facing more barriers to our sleep than ever before — from stress, long working hours and technology to health issues and general sleep hygiene — making the perfect night’s sleep increasingly elusive for many.

We decided to uncover the night-time routines and ritual of Brits to see how people are preparing for sleep, what common problems are keeping them awake, and how rested they feel the next day.

Here’s what we found…

Are Brits consuming caffeine, alcohol or social media too close to bedtime? 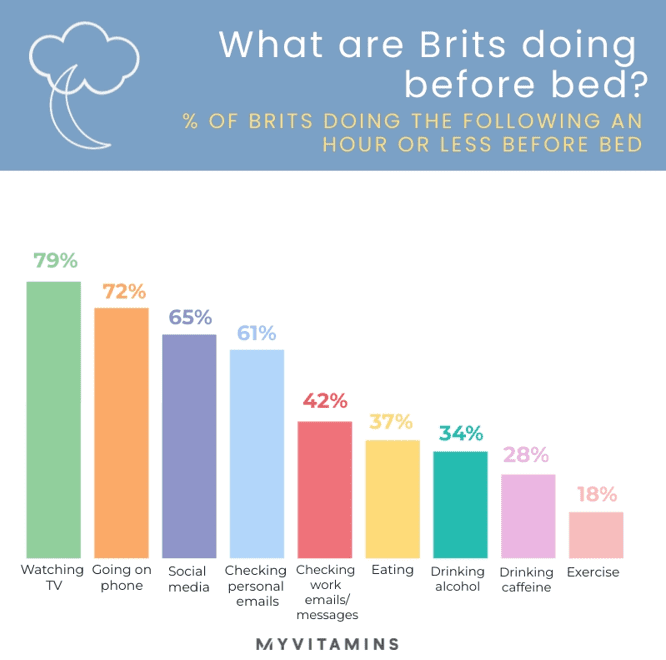 Watching television is the most common pre-bedtime activity, with 79% of the nation watching TV at least an hour before lights out. 60% of TV watchers keep the telly on up until 30 minutes or less before bedtime, with one fifth only switching it off five minutes before hitting the pillow.

Mobile phone use was the second-biggest pre-sleep activity, with 72% of people remaining glued to their device 60 minutes or less before bed. Worryingly, almost one quarter (24%) stay on their phones up to five minutes before bed. This is likely to disturb their sleep and prevent them from dozing off, as studies have shown blue light emitted by phones and tablets can mimic daylight and prohibit the brain’s production of melatonin, the hormone that aids sleep.

How we use our devices before bed is also important, with some tasks being more stimulating than others. Activities like social media, checking work emails and personal messages can cause stress and anxiety rather than create feelings of relaxation and calm. While over a third of people unplug from social media at least one hour before, 46% are staying connected until 30 mins or less before bed, while a worrying 42% check work emails less than an hour before bed.

Recent research by the University of Delaware found that using devices right before bedtime doesn’t always disrupt sleep, providing that the media consumed is relaxing (such as an audiobook, podcast, movie or gentle music) and that it’s for no longer than an hour. You can also try lowering your screen’s brightness and activating your phone’s sleep mode to change its hue from blue to orange.

Caffeine consumption is another common factor when it comes to disrupted sleep. Though experts advise you stop consuming caffeine at least four to six hours before bedtime, the most popular cut-off time in our survey was just two hours (13%), and one hour for 25-34-year-olds. Nearly a third of people stop drinking caffeine just an hour or less before going to bed. These figures suggest that caffeine consumption too close to bedtime could be playing a very real role in Brits’ struggle to get a decent night’s rest.

Alcohol is another substance that can negatively affect sleep. Among those we surveyed that consume alcohol regularly, 54% continue drinking up to an hour or less before bedtime, while over one fifth (23%) are drinking 30 mins or less before going to bed. According to The Sleep Charity, many people may believe that an evening tipple will help them sleep better as it enables them to unwind and relax after a busy day. But while alcohol might initially help you nod off, it can play havoc with your sleeping patterns through the night, disrupting the crucial REM stage and leaving you feeling groggy and unrested the next morning.

Women prefer pyjamas more than men, while over-55s most likely to sleep nude 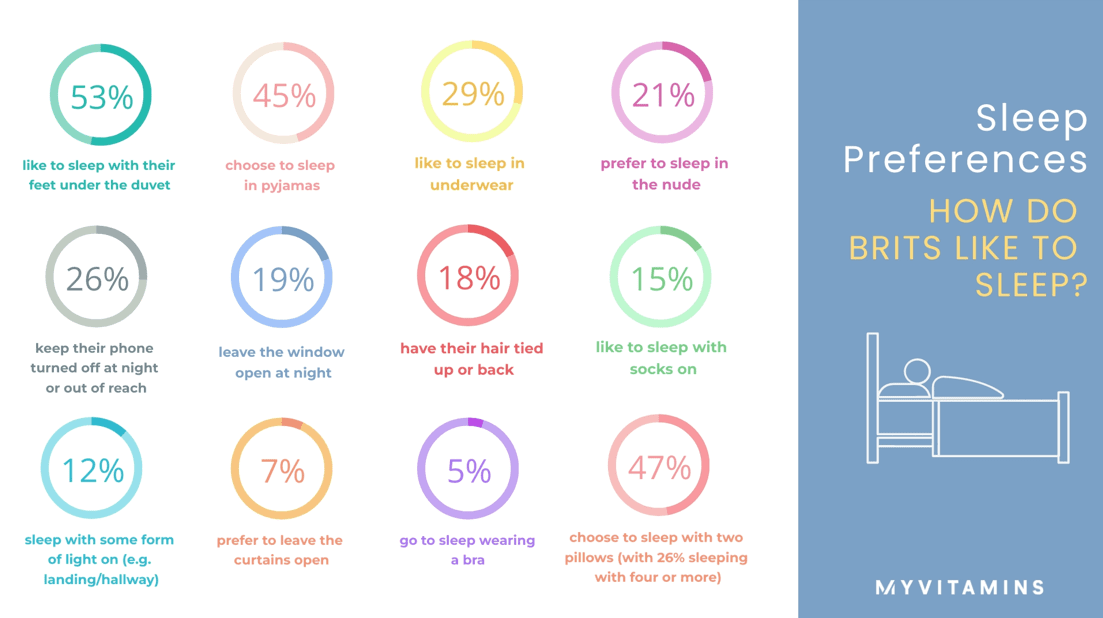 Bedtime conditions, such as the room we sleep in, what we wear to bed and the habits of our sleep partners can also make or break a good night’s kip.

When it comes to clothing, experts advise against layers, instead choosing something loose and comfortable. Or better yet — nothing at all. Sleeping in the nude has been known to have some serious benefits, such as lowering body temperature, promoting good genital health and even boosting confidence.

Having the right support for your head and neck is also important for optimal sleep, as the wrong type of support can cause misalignment in the spine and lead to aches or postural issues. While almost half of the UK (47%) opt to sleep with two pillows, over a quarter (26%) sleep with four or more. This seems to be more common for women, with a quarter admitting to using four pillows compared with just 14% of men. 27% of 25-34-year-olds sleep with four pillows — significantly more than other age groups.

While the benefits of keeping a device-free bedroom are widely known, only one quarter of people (26%) like to sleep with their phone turned off or out of reach. This was most prominent in over 55-year-olds (33%), and those who do not work (32%), suggesting that younger generations and those with busy working lives are likely to feel more attached to their phones at night.

Keeping the bedroom in total darkness can also aid a peaceful and restful night’s sleep, as it signals to your brain that it’s time to wind down. We found nearly twice as many women as men are likely to keep a light source on while they sleep (15% vs 9%), with 16-24 year olds more likely to do this than any other age group (19%).

Experts recommend maintaining adequate airflow and keeping the bedroom between 16 and 18 degrees celsius to create the ideal conditions for sleep, which is why having a window slightly open— even in winter — can be beneficial. However, only one fifth (19%) of people leave the window open when they sleep, with a quarter of over-55s also doing this — more than any other age group.

Bath or shower is the nation’s most popular bedtime ritual, especially for women 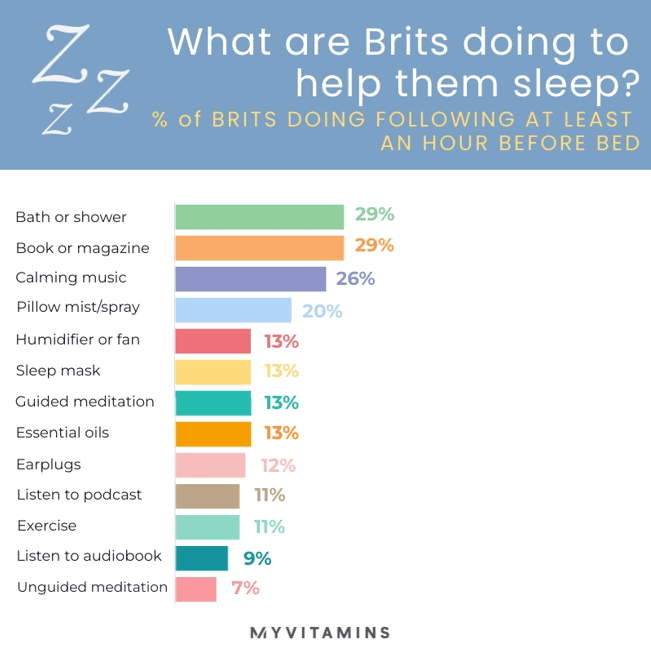 For 16-24-year-olds, their preferred pre-bedtime ritual is listening to calming music (34%). Over a third of over-55s claim not to have any pre-bedtime rituals (35%), but those that do are likely to read a book or magazine (34%). 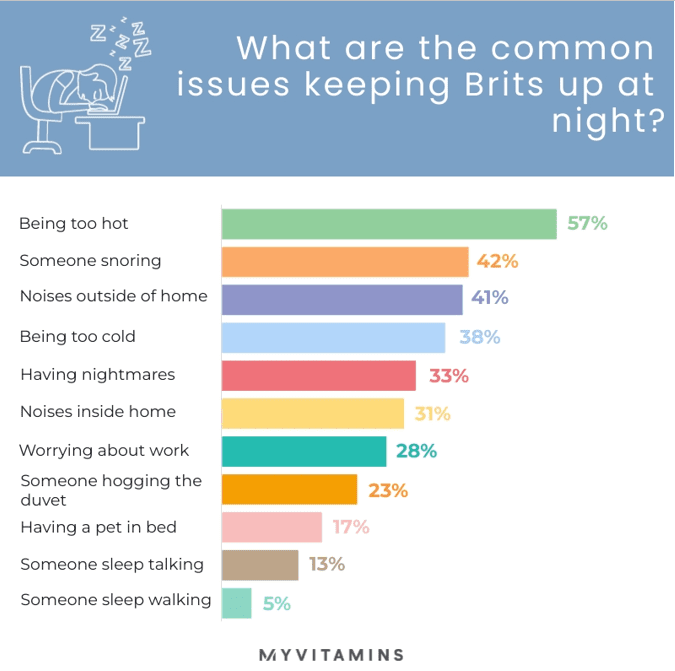 When looking at the most common reasons people can’t sleep, being too hot ranks highest, followed by someone snoring and noises outside of the home. However, many common sleep disturbances seem to be experienced by women more than men.

For example, 64% of women report struggling to sleep due to feeling too hot, compared with just 50% of men. This is also more common for over 55s (59%).

52% of women suffer with a snoring partner vs 32% of men, while 48% are disturbed by outside noises vs just 34% of men. Under a third of women also report having their sleep partner steal the duvet, whereas this was just 17% for men.

Nightmares are also more commonly reported in women (41% vs 24% for men), while 25-34 year olds seem more likely to have nightmares than other age groups (41%).

And when it comes to lying awake worrying about work, women seem more plagued by that too, with over a third (34%) experiencing pre-workday anxiety vs just 22% of men. We found this to be more common in 25-34s (36%).

60% of us love the snooze button

Among those who use an alarm to wake up, only two in five can resist the snooze button. Meanwhile, almost half of us (48%) will press it up to three times, with 12% admitting to hitting it more.

When it comes to the amount of time people snooze, we found that Brits are hitting snooze an average of  1.6 times a day. Based on the average snooze time of nine minutes, this adds up to 14.4 minutes every morning, or 100.8 minutes per week (1.68 hours). This means that Brits are losing 87.36 hours (3.64 days) to snoozing every year.

Participants in our survey were also split by profession to see how our busy working lives can impact our sleep.

Worrying about work at night is most common for those working in the legal sector, with 57% naming it as the biggest barrier to sleep. HR workers, meanwhile, are least likely to worry about work, with only 22% naming it as a problem.

Those working in finance are most likely to hit snooze compared to other professionals, with 86% pressing it once or more. This is followed by HR, 78% of whom also press it at least once.

Thanks to the myriad of sleep aids, gadgets and apps currently available, there’s no shortage of ways to refine your sleep routine and start getting the rest you deserve.

However, some habits, such as drinking caffeine or alcohol and using electronic devices late at night, can hinder rather than help. Try looking at your device usage and seeing where you can cut back, as well as stopping drinking caffeine and alcohol earlier in the day.

Creating the ideal sleep conditions in your bedroom such as keeping it cool, dark and quiet is also beneficial, as well as supplements such as magnesium tablets or our vegan-friendly Relax Gummies.

We surveyed 2,000 UK-based adults to find out their pre-bedtime activities and sleep preferences. Questions were multiple choice with some questions providing the option to select more than one relevant answer and add additional qualitative data if needed.

Results were split by gender, age, city of residence and profession.

Adele is a keen blogger and yogi with a passion for the vegan lifestyle. She loves exploring new (sometimes weird) foods, cooking & testing new recipes, and always appreciates a good sourdough.

The Best Vitamins For Beards

The Benefits of Vitamin D

The Complete Guide To Maqui Berry

Getting Help With Anxiety And Depression

Female Health & Fitness: The Impact Of Hormones On Exercise